A design task came my way last week for software start-up Romulus who have designed a sales management software tool. Their main business is flexible printed hospital screens but they have found that their network is interested in how to manage sales leads. Normally I would decline this kind of thing as part of a natural aversion to start-up-land and not wishing for too much distraction from doctoral work but the brief aligned well with my research interests.

Romulus have developed an interesting way of quantifying the strength of relationships along the way by tracking correspondence and meetings. The strength of a tie can be inferred from the volume and frequency of emails, gaps between communications including, meetings, phone calls and conference calls. The brief is how to represent the quality of relationships, an idea I have been working on in the context of social network modelling. The quality of relationships is usually indicated in social network maps by proximity of nodes and direction of edges as network maps are more concerned with quantity and topology than quality.

Currently the application is organised a bit like an address book with interactions provided for delving deeper into each individual contact which show the number, but not the nature, of communications. One question for Romulus was whether they wish to re-organise the whole application to reflect an emphasis on relationship quality rather than listing contacts. My suggestion was to use the wasted screen real estate visible above to triple the number of contacts shown per page. 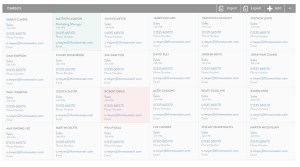 The next set of explorations was into graphical representations of relationship quality in a way that provides for adaptability, customisation and different modalities. The vocabulary of relationships is dominated by spatial and temperature language, we have close and distant friends, we have warm and cold relations, we are detached or attached. This led to some ideas related to connections such as chains, threads, and ropes. Abstracting those ideas led to lines and dots.

Finally I started thinking about the idea of overlap. Relationships aren’t really directional and ultimate in the way a line suggests, rather they are about co-involvement, reciprocity, mutuality and interdependence. This led me to venn diagrams and varying sizes of circle to indicate levels of reciprocity in the relationship.

An important for a system of this kind is trust. How do I know that what you are telling me is accurate? Where does the score and representation come from? What information is it based on? Thinking about how to address those questions led to a design that incorporated data sources directly into the contact panel. One element I struggled with was how to show progression or development in the relationship i.e. how far has the relationship evolved over what timescale? In the end perhaps this is unnecessary or can be shown at a further depth.

The final artwork sent out for beta testing looks like this and will hopefully result in some meaningful feedback. My suspicion is that the meaning of circle sizes is not clear and will need to be equalised, explained, or removed.

The next level of information architecture will involve further explanation of the data sources, how they are measured, where the data comes from, selection of communication modes and some direct calls to action i.e. if relationships are weakening over time because you have not called the contact.

Future directions could include semantic analysis of the content of communications and an indication of the value of a sales lead (in both monetary and cultural capital). Some indication of the strength of weak ties following Granovetter’s famous theory would also be useful.

bringing you curiosities, rarities and marvels wherever we find them
View all posts by johnfass →